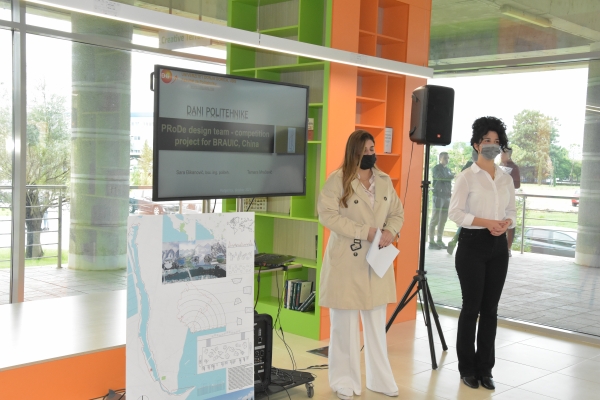 A team of undergraduate and postgraduate students at the Faculty of Polytechnic, under the mentorship of teaching associates, participated in the analysis and conceptual proposal of the urban design project at the Port Milena location in Ulcinj. For the development of this project, the students used the capacities provided by the Laboratory for Product Design (ProDe) at University of Donja Gorica.

The presented analysis and proposal of urban design is part of the work from the student competition within the Belt and Road Architectural University International Consortium (BRAUIC), under the auspices of the Beijing University of Civil Engineering and Architecture (BUCEA). At the competition announced in March 2021, the project was presented in the selection "International Student Competition on Architectural Design". The competition attracted more than 500 lecturers and students from 34 universities and 13 countries. The huge number of submitted works is a proof of the growing attractiveness, cohesion and influence of BRAUIC and its strong role in promoting scientific, technological and educational exchange among architectural universities.

The University of Donja Gorica received an award for organizational achievements within this international competition, in the field of architectural design and digital modeling.

After the end of the competition, project activities and research results were presented in the Entrepreneurial Nest within the event "Days of Polytechnics", which was held in the period from 6-8. October 2021.