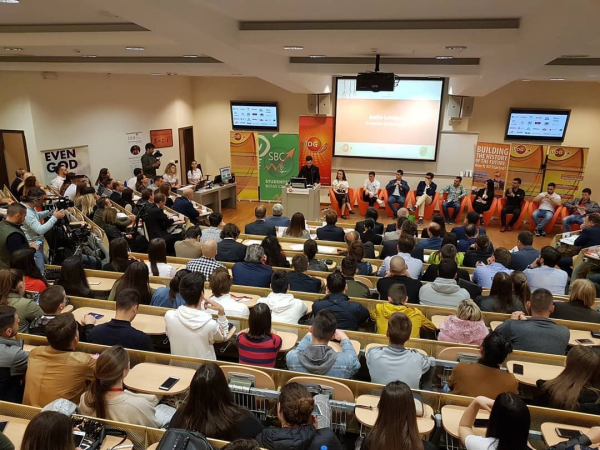 This year, on the day of Europe, on May 9, UDG has traditionally organized the IX International Stock exchange of Entrepreneurial Ideas. After the Stock, the UDG Entrepreneurship Nest was ceremoniously opened. Prime Minister Duško Marković and Rector Veselin Vukotić visited the newly opened Entrepreneurship Nest and talked to students about chances and possibilities that it gives to them. They used the opportunity to talk about how students can use the ‘Nest’ and that it’s going to be the place of creativity, development and spirit of entrepreneurship.

University of Donja Gorica is one of the first supporters of student entrepreneurship in Montenegro. Therfore, guided by the Professor's equation, where the student's ability is equal to the knowledge gained, multiplied by the intensity of living squared (S=z·i²), UDG Student Business Center in cooperation with the foundation "Freedom & Entrepreneurship" continues its, now traditional, entrepreneurial-oriented projects, which are, every year, more and more, confirming that luck really follows the ready ones!

This year we had over 100 registered ideas. Given the great number of ideas, the management team of the Stock of Entrepreneurship Idea decided to add A List (15 Ideas) and B List (15 Ideas) in addition to the top 10 ideas (TOP 10) that were presented to the audience, which were also found in the IX publication of the Idea Book.

The top 10 ideas that are included in the special book “Idea Book” had the opportunity to present their ideas to the audience. The best 10 ideas that were presented are: Anđela Vukašević – Design & Shine, Vuk Strugar – Part of us, Eldin Kurpejović – You want me – You goat me! ,Darko Savović – ReFOODcycler, Strahinja Jakić – Smart Voice Switch, Marina Filipović –Smart box for medicine, Anđelko Milić – Smart Locks, Arijan Liharević – E-bag, Armin Bošnjak – Ministry of 3D, Almedin Beganovič – Atlas.

After the presentation, auction of business ideas was organized and every company had the opportunity to support ideas.  The highest bid was for the idea of Smart Voice Switch, that was made by Stahinja Jakić, for which Zetagradnja set 1. 900 euros.

After the Stock, the UDG Entrepreneurship Nest was ceremoniously opened.

Prime Minister of Montenegro, Duško Marković, opened the Entrepreneurship Nest. He pointed out that we need new ideas, creativity and much more work and responsible attitude towards the resources we have.